I am so excited! I made butternut squash ravioli yesterday…and they actually look like ravioli. I have not tasted them yet…so maybe I should not be so excited.

I found the idea for the recipe online. I like to tweak recipes most of the time and sometimes it works. The original called for Mascapone cheese, which is super rich. I wanted something I can eat for dinner, not just an appetizer. So I decided to add honey goat cheese to the roasted butternut squash. (I cut it up and roasted it a few days ago with a little olive oil. I think 375 degrees for about 30 minutes.) Most of the recipes I looked had had sage in them but I am allergic to sage, so went a different route. I decided to add nutmeg, a wee bit of cinnamon, kosher salt and just a pinch of pepper. Then, however, the filling was so yummy I kept eating it….you know someone has to be the “cup bearer” to make sure it’s not poisoned.

tasting it!) Did I mention to mash the roasted butternut squash? Hmmmm no, ok, smash it along with the cheese and spices and there you have it. 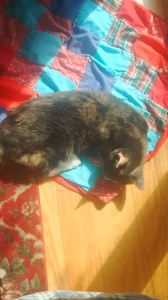 The next part is easy. Use won ton wrappers as your “pasta”. Add about a teaspoon full of filling, dip your fingertip in a little bit of water then go around the edges of the dough, fold it in half and press the edges together. I tried different amounts of the filling to see what works best. I also found that air can get trapped, so I would press the middle just enough to spread out the filling and let the air out.

It took me just about an hour to make 34. There would have been more but you know, I ate some of the filling! Also, it would not have taken so long, but I checked on Bebe and this & that.  I hope to cook some tonight. Until I use them, I put them in a plastic bag so they won’t dry out.

Encouragement today: Ask God to show you something you have been putting off because you think it will be too hard and also ask Him for the wisdom and guidance to do it in an easier way than what you might think on your own. Please let me know what He shows you and add photos of your project! God bless you. May He do exceedingly abundantly more than all you can imagine.

And PS…it is not cheating to google your project to see if someone already has ideas to make it (0: )